A Number of years ago I wrote a Blog about community based events. The Blog was appropriate then and it is still appropriate now. I am re-posting this Blog now in two parts.

Most festivals and events are community based. As such, they give whole communities the chance to come together and show off their town to visitors.

Festivals and events not only make residents proud, they are just good business! Think of the economic impact. Festival visitors eat in community restaurants, stay in community accommodations, enjoy community attractions and purchase goods in community retail stores. If visitors like the festival community they come back and bring their friends and the cycle begins again. And, if they really like the community, they may come back to live there. Community supported festivals and events have the domino effect, so how does an organizing committee ensure maximum community involvement and, thus the benefits of that involvement?

International Plowing Match 2016 (Huron County-Walton)
This was a one-time event that pulled together a number of communities and groups into one cohesive unit. Although there were no large towns close by, the IPM organizing committee was able to attract volunteers and financial support from all the communities in Leeds-Grenville! It was a Herculean task that took over 3 years to achieve, but the end result was nothing short of spectacular! All the communities involved were enriched by the experience.


The food section of this festival is almost completely manned and operated by various community groups, church committees, sports associations and service clubs. The food that they serve and the presentation of their respective booths far surpasses most commercial food served at other events, and, the beauty of this community involvement is that the money stays in the community to help the community! 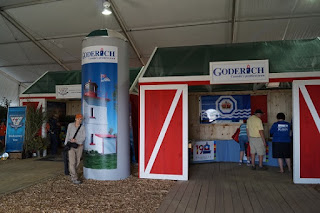 Posted by Gary and Judi McWilliams at 10:31 AM No comments:

Things That Make You Ask WHY… (Part Two)

The next day, bright and early, we arrived at the show. This is when the next series of “ask Why” started. It began when we were about to order ordered food. Two bottles of pop were going to cost us about $9.00 and a hamburger the same. Why do the food prices need to be so high? Is it because the food vendors have a captive audience and can charge as much as they like because people need to eat and are willing pay the high prices or, is because the facility owner charges the food vendors so much that they have to charge that much to make a decent profit. Perhaps it’s a combination of both. Whatever the answer it still makes you “ask WHY”. The most shocking “WHY” came when I tried to access the Internet! I just wanted to check my e-mails and do some work on my website during downtimes in the show. When I tried to log on, I got a message giving me to phone to arrange access. Instead of phoning, I walked to the facility office in the complex to arrange for access. I asked the girl in the office what I needed to do. She told me that there was a charge for access. I asked “how much” and she told me “750”. I said naively “$7.50”. She said “No sir that would be $750.00”. I could not believe what I had just so I asked her to repeat what she had said. The girl, a little embarrassed now, repeated the amount “$750.00”. I asked her “how they could justify such a price”. She shrugged her shoulders and said “I am sorry sir but that is the cost”. That was the end of our conversation. Needless to say I didn’t purchase access. So this brings me to my final “ask WHY”. How can they possibly justify charging this much? High speed wireless can be purchased for one year for less than half that price. I can understand charging that amount or more to a large corporation who needs a complicated installation, but all they needed to do for me, and others like me, is give me access through a username and password. Hotels do this for their customers all the time and don’t charge for it. Ultimately, it just makes you ask why! 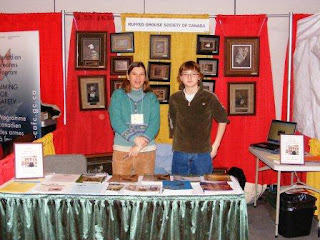 Posted by Gary and Judi McWilliams at 4:22 AM No comments:

Things That Make You Ask WHY… (Part One)

We had the opportunity to be an exhibitor at a large consumer show in , so I decided to check out the pricing. I was surprised how reasonably priced the booth was. Several years ago Judi and I had exhibited at the same show and the booth prices were almost the same. I also checked out the other costs associated with have a booth at the show. Such cost as installing electricity, renting furniture and obtaining a parking pass. The cost of the electricity was comparable to what we had paid before. The parking was comparable and this time we could park indoors. We had never rented furniture before, so I had nothing to compare prices with, but the show package seemed reasonable. With the pricing confirmed, we decided to go ahead with having a booth.


On set up day Gary packed the car and came to Toronto with my 14 year old nephew. I wasn’t feeling well so I asked my nephew to help with set up. When we got to the show, the security guard stopped us and asked my nephew how old he was. When he found out my nephew was only, he told us he had to be 16 to be allowed in. This was the first thing that made me “ask WHY”. The guard told us that it was the city’s rule and it was because there were “tow” operators in the building. I can understand now allowing little kids in the building, but a 14 year old is not a little kid (my nephew is almost taller than me and likely smarter). It seems to me that the government is using a cannon to kill a fly! Eventually we were allowed in and we set up the booth.
(To Be Continued) Posted by Gary and Judi McWilliams at 3:33 PM No comments: 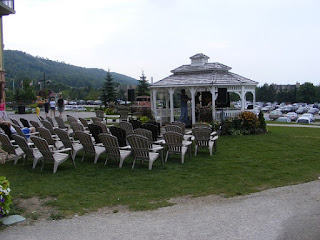 Posted by Gary and Judi McWilliams at 5:45 AM No comments: