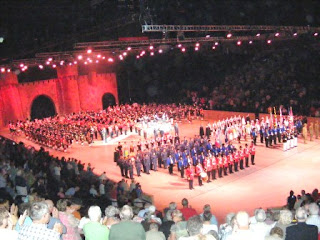 The IMPORTANCE OF SPONSORSHIP, FUNDING & GRANTS …

With the economic challenges today, it would seem it is critical to obtain/maintain Sponsor funding and Other Sources of funding. How you go about obtain funding? I asked Ms. Balinson, of the Canadian International Military Tattoo & Festival how their Festival keeps “Sponsors” interested in supporting your efforts and “keep them happy”. With regard to Funding, she replies ... “We find it impossible to mount a show with a budget of $ 300,000 and cover the costs by ticket sales.  We offer a very low ticket price for seniors, veterans and families.  Consequently, we are very dependent on corporate sponsorship and grants.”  With regard to Grants, Joan tells us … “Due to the unique nature of the program, music, dancing, military drills, pageantry, and the fulfillment of our mandate “Connecting Canadians to their Military through Music” we submit government grant applications at all three levels.  The challenge is that the available grants are being reduced each year.  The problem with the special funding for the Commemoration of the War of 1812 set aside by the Federal Government and administered by Department of Canadian Heritage is that the announcement of the funding and the amount of time allotted to submit the application process was very short.  Then the review and notification of the successful applicants was going to take 5 months.  In the case of the Tattoo, with a theme of the beginning of the War 1812 and show dates of late June, 2012, we could not wait until May to know if we had the funds to engage the Re-enactment Bands and Units from outside the Country so we had to decline the opportunity.  I was informed by staff that we could only apply for 2012 despite the fact that we are commemorating the War in our shows, 2012, 2013 and 2014.”
(To Be Continued)
Posted by Gary and Judi McWilliams at 4:05 AM

Email ThisBlogThis!Share to TwitterShare to FacebookShare to Pinterest
Labels: Inside Scoop 70