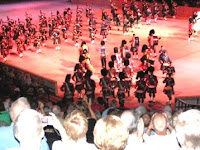 "The Tattoo is a registered Not-for-Profit charitable organization and is a 2 ½ hour show with over 500 performers composed of military bands, pipes and drums, dancers, song, pageantry and special performing groups. Special emphasis is always given to our veterans from all theatres, and they are included in the show. There is no other show of this scale west of , and we provide the experience for the general public to connect the public to the military through music.”
Joan tells us that the “Tattoo Buffet Luncheon usually accommodates 400 people at the Convention Centre.  This year, we are serving a typical pub style lunch with Steak & Kidney Pie, potatoes, vegetables, shortbread dessert.  We have door prizes, live entertainment and two pipers who escort the guests to make the ten minute walk to Copps Coliseum where they go to their seats to see the show”.
“The adult ticket price is $48.45 per person. Senior/Group ticket price is $37.15. Veteran’s ticket price is $25.85. (All prices include facility fee and HST).  You will also have the option of purchasing a ticket to the Tattoo Luncheon prior to the Sunday performance. Ticket price of $33.90 (includes HST) will give you a hot buffet luncheon, entertainment, and a chance for a door prize. We will then have a few pipers lead everyone down the street to the arena, and as you already have your Tattoo ticket, you will be able to go right in to your reserved seat.”
Next week I will be reporting on one of my favorite discussions with Ms. Balinson ... The Inportance of Volunteers. My interview article will focus on Volunteers for Success!
(To Be Continued)
Posted by Gary and Judi McWilliams at 11:05 AM