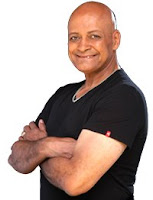 Spider met George St. Kitts at CFRB Radio and has been a fan of George’s for years. As well. Spider tells me that George is most likely one of the greatest performers around and is an amazing producer as well. They hooked up and wondered about hosting a tribute to Black History Month through music. He tells me that they thought that this production would be a great way to show the “pride in what we gave to pop music”. It’s about recognizing the contributions over the years and to help raise awareness regarding artistic contributions made by members of the Black Diaspora. Spider himself is an accomplished singer (although as a professional world renowned motivational speaker, Spider tells me most people are not aware of his vocal talents). Spider has his own 10 piece band called Spider Jones and the Fabulous Web. Spider tells me that “music is his passion”! He states “music is like opium to him, he gets high on music”. He comes by singing naturally and attributes his focus and part of his success to his strong family unit. Specifically, Spider gives praise to his “closest friend”, his wife, partner of 37 years. He says “she keeps me anchored, she is a great advisor and very logical”. You might be wondering why I asked Spider all of these personal questions. He has led an incredible life and journey. He is a most interesting individual and I wanted to share with you some of his story to help you become aware of the wonders of such accomplishments.
(To be continued)
Posted by Gary and Judi McWilliams at 6:41 AM

Email ThisBlogThis!Share to TwitterShare to FacebookShare to Pinterest
Labels: Inside Scoop 10