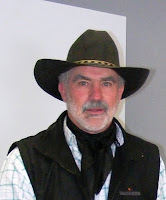 My next question for Terry started out by asking him … it seems that you respect people who they themselves have respect for nature, horses and other humans. It also seems you respect people who have courage and perseverance. How much do you perceive the youth of today and their concept of the importance of these qualities? With this Mantracker said … “tough question!” “I don’t get to see many young kids and the kids that I see don’t have the skills or work ethic that we had at kids”. He went on to tell me that “when he was a kid, there was no back talk, you went about your day knowing that you had chores to do. If your parents said go feed the chickens, you went, “no backtalk”. Terry said that “Kids today don’t seem to have any kind of drive anymore”. “Kids seem to have poor attitudes and are very cocky. They have no respect for elders and no discipline”. Mantracker totally believes that “kids should “be yourself”, but, that you should learn respect.” He says that “time outs” just don’t cut it” He feels that “parents/caregivers keep treating our kids like kids, “like sissies”, and that the grown ups want to keep the kids, kids. Later, as the kids become young adults and still act like kids, the parents wonder why they act the way they do”. He says “the kids are not taught to respect, be mature and aren’t learning to care and fend for themselves”. Terry was raised in Creemore (near Staynor, Ontario), with his Uncle who stepped in for his Dad. At the age of 10 he lived with his grandparents until he was 17 when he moved to Alberta.
(To Be Continued)
Posted by Gary and Judi McWilliams at 8:36 AM

Email ThisBlogThis!Share to TwitterShare to FacebookShare to Pinterest
Labels: Inside Scoop 36