Interview with David Brunelle (Part One) 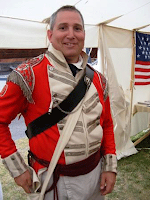 With the War of 1812 Bicentennial celebrations fast approaching and many special activities happening along the way, I wanted to continue my research on the War of 1812 and find out as much as I could about it. It’s not often you get to speak with “1812” personally! That’s just what I did a few weeks ago, when I was treated to a conversation with Mr. David Brunelle, currently the Project Director of the Southern Georgian Bay War of 1812 Bicentennial Committee. Dave is well versed in the War of 1812 as he has been involved in re-enacting for about 20 years now. He tells me it that it was his love of history and the military that initially intrigued him into this life of re-enacting. It has kept him going all these years. Dave was introduced into the “hobby” while he working as an interpreter at Discovery Harbour. Mr. Brunelle is currently with the Royal Newfoundland Regiment Bulger’s Company. It is now a Not-For-Profit/Charity group promoting living history. As I spoke to Dave, I began to realize just how much knowledge and information he had to share with me. For those of you who have been on the field in battle or at an encampment with Dave, or visited a re-enactment and have seen him in full uniform, you will see just how serious and professional he is while “in character”. I started my interview with him asking the question “how true to authenticity are you while participating in re-enactments?” Dave said, “as true as possible for all aspects, from all the equipment to the training, drilling and knowledge. Some encampments are out-of-public-sight, so the “authenticity” issue can have some leeway, as is doesn’t play such a role in the effects of the visual observation by the public audiences”. (My “Ten Foot Rule” applies here, I guess!) In seeing Dave at several re-enactments I noticed that he usually wears a particular uniform. It led me to ask him what his favourite “character” was while portraying in living history re-enactments.
(To be continued)
Posted by Gary and Judi McWilliams at 9:42 AM

Email ThisBlogThis!Share to TwitterShare to FacebookShare to Pinterest
Labels: Inside Scoop 4